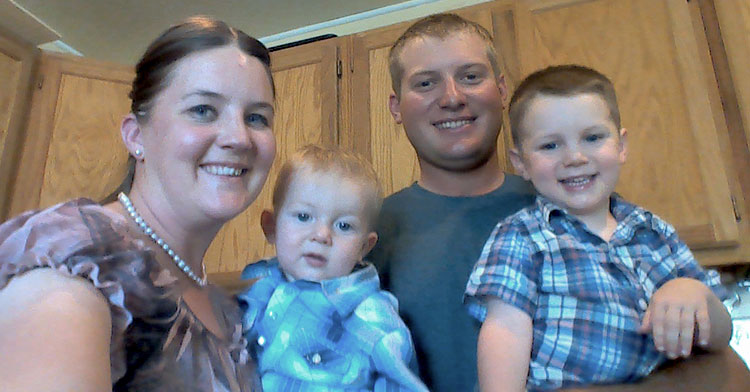 How This EveryDollar Couple Paid Cash for a Truck

When Joanna made the trip from New Zealand to Colorado, she didn’t expect to make the United States her home. “I came over to stay with a lady on a ranch who needed someone to help train horses,” she explained. It sounded like fun, so she hopped on a plane and came over.

Less than a week after she arrived, she met Mark, the man who would soon become her husband.

Fast-forward to today and Joanna and Mark have been happily married for almost four years. One of the secrets to their success? Seeing eye to eye about finances.

How EveryDollar Helped This Couple

“Before we got married, we talked a lot about money,” Joanna said. “We wanted to make sure we were on the same page about it. And we can honestly say we’ve never had a money fight.”

It helps that they both grew up with the mentality to pay cash for things. Joanna’s parents, especially, were adamant about avoiding things like credit cards and car loans. “We were both raised with this idea to avoid going into debt,” she said. She and Mark have carried that legacy into their own marriage.

“We bought our first car after we were married and paid cash for it because that’s just what you do,” she said. “We’re not those people who have a car payment. That’s just how we were raised.”

That doesn’t mean things have always been smooth sailing, though. Joanna and Mark live in rural Colorado, in a place that’s about 70 miles from town. The distance wasn’t a big deal until they lost their car—the first one they bought as a married couple—in a fire.

They knew they needed to get a new vehicle, and it couldn’t be just any old beater. “The winters get really bad here, and we get snowed in,” she said. “We knew we needed a pickup since the roads are so icy and cars just can’t go anywhere. And it needed to be a standard transmission because automatic vehicles really struggle out here in the ice.”

Joanna and Mark knew a truck would cost a pretty penny—and since they live on $2,800 a month, it wouldn’t be something they could purchase right away. But they already knew that getting a car payment wasn’t even an option on the table.

So they waited, and they saved.

“Every month, we had a line in our budget to save for the truck,” Joanna said. “We sold a few things. We even opened a separate savings account at a different bank.” For months, they made deposits into the account, knowing it would be easier to see their progress if they kept the money separate from their regular savings.

It also helped them avoid temptation. “There are all kinds of things that are easy to spend money on,” Joanna explained. “We didn’t want to be sidetracked from our goal. Keeping the savings in a different account was one way we could put things in place to make our goal easier to reach.”

When they finally had enough money saved up, Joanna and Mark made the long trek to the dealership. The truck they had been dreaming about, and saving so hard for, had just arrived the week before. “It was perfect. It was the right size, the right age, and in fabulous condition. But they couldn’t come down on the price to meet us where we were,” Joanna said.

“We looked at each other and said no way. And the dealership was pushing us to get a payment and just finance the difference,” Joanna said. The dealership told them two other people were interested in the truck. But Joanna and Mark weren’t willing to take on debt. “We walked out and left the truck there.”

That night, they went to a family reunion. When they shared their story, they got mixed results. “Some family members said we did the right thing by not going into debt,” Joanna said. Others said they were foolish to leave the truck behind. “They said nobody in the United States can live without debt. It was really discouraging,” she added.

Three days later, Joanna got a phone call from her sisters back in New Zealand with big news. The family had run a horse business back home, and it turned out they forgot to buy Joanna out of her investment in some of the equipment. “They said you still have money here, so we’re just going to deposit it into your account,” she said. The amount they sent over was just enough to buy the truck they left at the dealership just a few days earlier.

“We called up the dealership and the truck was still there,” she said. “The other two people who were interested in it couldn’t get any financing. Their credit scores were too bad. So we walked in with a roll of bills, plopped it down on the guy’s desk, and said we’re taking the truck home!”

They drove the truck home that night—free and clear. And it’s all thanks to the budget.

“Our budget meetings are a fun time to sit down, relax, and evaluate our goals. It’s a chance to pat ourselves on the back. We look at what we want to do, what we’ve done, and how far we’ve come. It’s our time to encourage each other,” Joanna explained.

She also says the key to winning with money starts with being on the same page as your spouse. “Don’t be afraid to talk about things. Even if you think there might be a conflict, it’s easier to sit down and talk it out rather than staying quiet and clammed up. You’ll end up with no money at the end of the month because you aren’t communicating about it.”

“And don’t be afraid to be different,” she said. “There’s so much freedom in not caring about what people think. Someone said to my husband’s face that we were stupid not to finance that truck. But we went home with clear consciences because we hadn’t done something that compromised the values we hold.”

“And look what we have now,” she added. “And we didn’t have to compromise to do it. That’s freeing.”

Whether you’re saving up for a vehicle like Joanna and Mark or want to stick to your money goals each month, EveryDollar can help. It’s free to use and only takes 10 minutes to set up!