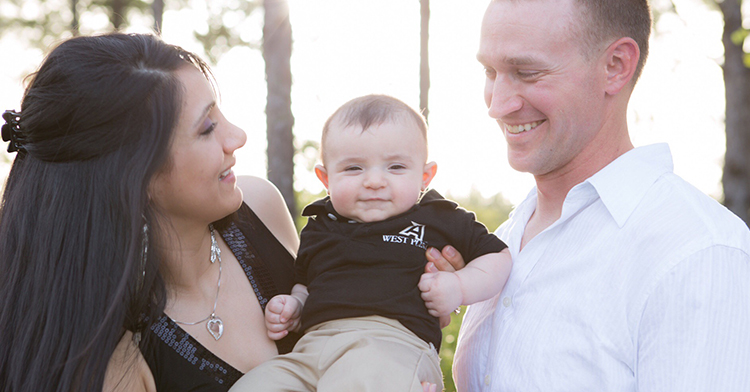 When Joel was deployed to Iraq in January 2015, he and his wife Nargis (both U.S. Army captains) were two months away from becoming parents and had more than $100,000 in total debt. Being able to talk about money was difficult but important. But EveryDollar made it easy for them to communicate without saying a word.

“While I was deployed, it helped to streamline our conversations about finances,” Joel says of the budgeting tool. “When we actually talked online or on the phone, we didn't have to spend any time talking about money. We communicated about money through the EveryDollar iPhone app. It is formatted in a way that makes budgeting really easy.”

Life was crazy for this Georgia couple, and anything that could help them was a welcome addition. Joel says EveryDollar was “the tool that painted a picture worth a thousand words. With EveryDollar we took control of our money, squeezed every penny out of it, and made our money work for us!”

When they joined EveryDollar in April 2015, they had about $108,000 in debt on their house. They made their budget and were able to:

Oh, and pay off the house. That’s right—they are saving for the future, avoided a student loan, and now don’t have a single payment in the world!

That kind of success didn’t just pop up. They went after it.

Nargis and her husband had a big-time desire to be free of their debt before Caleb, who is now 14 months old, became a toddler. “We thought it would be easier to sacrifice for a few years in the early stages so that we could enjoy life later,” she says.

Joel agrees, adding that they wanted to “get ahead of things with regard to finances as opposed to playing catch up for the rest of our lives. I don't feel like we were out of control, but just constantly playing catch up. We are both very disciplined with money. We just needed a system to manage it more efficiently.”

And then came EveryDollar. “It’s easy to use and cuts the budget meeting in half,” Nargis says.

“Before, we were using an excel spreadsheet with multiple tabs with interlinked cells. It was not user-friendly, and this app makes it so much easier to see our money and control it more efficiently,” Joel says.

Now telling their money where to go is simple, and things will only get better—and a lot more fun—from here.

The couple’s next goal is to go on their dream honeymoon, which wasn’t doable when they tied the knot in May 2014 because of their work schedules. And that’s just the start of what they can do.

Joel says the true reward of being in charge of their finances is how it puts them “in a position where we can make a difference in people's lives.”

Nargis loves the thought of giving to people in need and being able to “take family vacations without having to worry about money, and just enjoy the moments.”

Being out of debt and in control certainly makes them worry less—and that goes without saying.

Take control of your money by creating a free budget with EveryDollar. It’s free and takes only 10 minutes to set up. Once you’ve got the hang of it, you’ll be tracking against your budget in seconds a day.