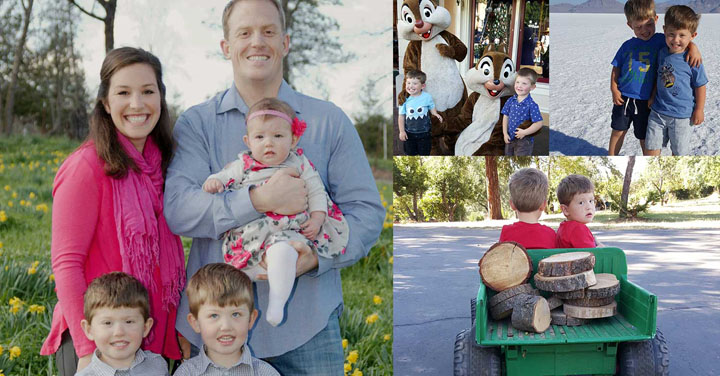 How This Family Feeds Five for $100 a Week

That’s exactly what Chris and Lydia are doing, thanks to their determination to live on a single income in northern California! And while sunny California is a beautiful place to be, the cost of living is high and the taxes are even higher. “You almost have to have two working spouses contributing to the household income,” Chris said.

But when he and Lydia started talking about the possibility of having children, they decided they wanted to find a way to make it work. “It’s one of the reasons we sold our home,” he said. “We couldn’t afford our payment because it was about half of our combined monthly income at the time.”

Now, thanks to a lot of hard work, they’re happily living on just one income and have three beautiful children, ages 4, 3, and 5 months. “It was right about the time we started using EveryDollar that we were able to really hone in on our expenses and income and determine whether it would be financially possible for her to stay home,” Chris said.

One way they accomplished their goal was by laser focusing on their grocery budget. Five mouths are a lot to feed, especially considering the average family of four in America spends anywhere from $700 to $900 a month on groceries.(1)

“We used to circle around the grocery store and buy whatever we wanted—usually while we were hungry. The amount we were spending was astronomical.”

Even though there are five of them—three being small, growing children, no less—Chris and Lydia only spend $400 a month on food. That’s only $100 a week.

“We used to circle around the grocery store and buy whatever we wanted—usually while we were hungry. The amount we were spending was astronomical,” Chris explained. They weren’t paying much attention to where they shopped. “And different grocery stores can charge two or three times the price for the same product.”

But there’s more to their budget savvy than shopping around and finding the lowest prices.

How They Saved on Groceries

“Once we narrowed our shopping down to a low-price grocery store, my wife really broke down our $100 a week into specific subcategories,” Chris explained. They had a certain amount they could spend on meat, vegetables and canned goods, for instance.

Consider fruits and vegetables. “Say we have $15 to spend on fruit. We go to the store and look at whatever fruit fits within that budget limit. That way we aren’t limited to just buying strawberries every single time.”

This allows them to modify parts of their grocery list based on what’s in season and on sale.

They also pay a lot of attention to where the majority of their grocery money goes. And once they spot those pain points, they can make changes accordingly.

“We used to buy a ton of cereal,” he said. “It cost us like $30 a week. So we decided we’re going to eat oatmeal now instead. That took out a huge chunk of spending for us because oatmeal is just so cheap. And we can add fruit in it, and it tastes great!”

It’s become a bit of a game too.

“All the cashiers are in it with us now because they know we’re trying to stay under $100 a week,” he said. “They get all excited when we’re inching toward $85 or $92. The closer we get to that $100 mark, the more they start freaking out. It’s really an adventure when we go grocery shopping now.”

In addition to focusing on how much they spend, they’re also diligent about planning their meals each week to make sure they’re getting the most use out of their hard-earned cash. “Treat it just like the budget. You have to have a plan for everything you’re doing, or else you will just waste money,” he said. “Without a plan, stuff just happens.”

Chris is also working hard to increase their income.

When they first began talking about starting a family, they quickly realized they needed to start budgeting since they wanted to make the transition to one income.

In order to bump up his income, Chris focused on investing in his education, working hard at his job, and seeking promotions whenever possible. “Those things enabled me to go from $40,000 a year to $75,000 a year,” he said.

He stayed with the same job the whole time too. “Working in government, you basically get a 5% pay increase every year,” Chris explained. “So starting at $40,000, it would have been impossible to get ahead without getting promotions.”

He started studying for his CPA and continues to stay motivated. Their current goal is to make $100,000 a year as soon as possible—and they’re pretty close to hitting the mark!

“We also started going to thrift stores and garage sales to buy things to sell on eBay,” he said. It’s become a fun family activity. Chris and Lydia will pack up the kids, head out on the weekends, and let them pick out things they want to sell too. “It’s great because in California the weather is so nice,” he said.

They don’t always score big. They often buy things for a dollar or two and sell them for $5 or $6. “But sometimes we get really lucky and the margins are just massive,” Chris said. “Most of the time we make a 300–400% turnaround, even including shipping costs.”

No matter how they’re doing it, it’s definitely helping them increase their take-home pay and scoot closer to their yearly income goal. “It provides about $15,000 a year for us right now,” Chris said.

They credit a lot of their success to the fact they don’t have debt—and that they live on a budget.

“Most of the people we come in contact with on a daily basis live through debt. And they feel like the only way they can achieve what they want is by being in debt.”

But Chris and his family don’t feel like they’re missing out. They eat well, travel, and get to spend a lot of quality time together. In fact, they even just returned from a trip to Disneyland—and paid for the entire vacation in cash because they’re able to save about $1,200 a month now that they’re purposefully telling their money where to go.

“We’re doing so much without debt,” Chris said. “And it’s only getting more powerful and more joyful with the more money we make—and the more freedom we have to use that money.”

Make your money goals a reality with an EveryDollar budget. It’s free to use and takes less than 10 minutes to set up.